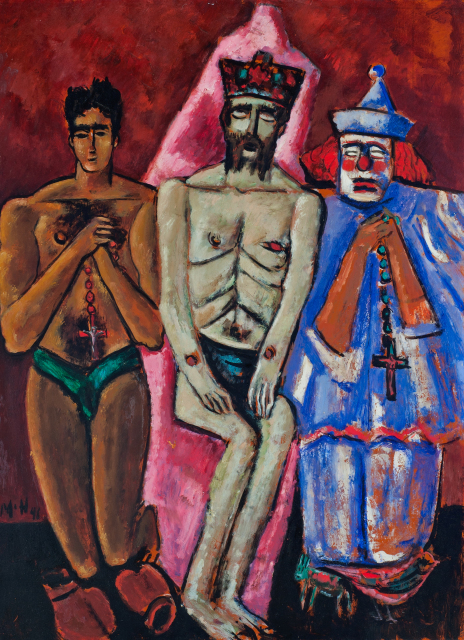 Three figures are placed side by side, filling the composition. A man is seated in a pink throne at the center, wearing a crown. A clown kneels to his left, his hands clasped in prayer, and a boxer is on the opposite side, kneeling and holding a rosary. The figures are outlined with black and the background is red.

About this Work
Marsden Hartley spent the years 1913 through 1915 in Berlin, where he met Expressionist painters Wassily Kandinsky and Franz Marc. Christian iconography appeared prominently in the work of the German Expressionists, who interpreted traditional motifs as universal metaphors for human suffering and compassion. Hartley alluded to these concerns in his late painting Three Friends. It depicts three socially marginalized figures?the crucified Christ, a nearly nude boxer, and a clown. These figures appear unified through suffering, but also through prayer and companionship.


Provenance
Provenance research is ongoing for this and many other items in the Eskenazi Museum of Art permanent collection. For more information on the provenance of European paintings, sculptures, and drawings produced before 1946, please see our Nazi-Era Provenance Research Project. For all other inquiries, please contact the department curator with specific questions.


Viewing Information
This item is currently on view.

Download this Image
The Eskenazi Museum of Art provides images of its collection, free of charge, upon request. This artwork is not under copyright protection, so you can request the image and it will be emailed to you when the request is complete.